The importance of sleep is emphasized starting early on in life: parents plan naps and early bedtimes for their children to support healthy growth and development. However, getting adequate sleep later in life is just as important – though it is often harder to achieve. The seven to eight hours per night recommendation seems nearly impossible with the busy schedules and endless responsibilities. Functioning on a few hours of sleep may seem doable at the time, but it is unsustainable in the long-term and can significantly affect body composition over time.

Sleep your Way to a Healthier Body Composition

Sleep has a huge effect on how the body functions on a cellular level and the amount of sleep per night can have significant effect on body composition. Getting enough high-quality sleep helps control hunger hormones and increases basal metabolic rate, which promotes more calorie burn throughout the day. With a healthy diet and regular physical activity, this can lead to more fat loss over time.

Sleep can increase lean muscle mass due to its role in recovery, specifically rebuilding broken down cells and tissues. The brain releases hormones during sleep that are directly responsible for protein synthesis and muscle growth, including human growth hormone and testosterone. 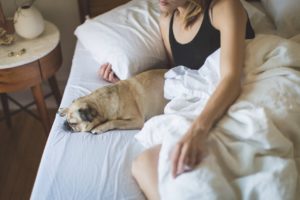 More than 70 percent of human growth hormone secretion occurs during slow-wave, Stage 3 sleep. Maximizing the body’s time in this deep stage of sleep is critical to increasing muscle mass and improving body composition. Testosterone, which plays a major role in muscle growth in both men and women, has been shown to decrease with inadequate sleep.

In addition to a reduction in the secretion of beneficial hormones, not getting enough sleep can directly reduce lean muscle mass. When fatigued, the body is signaled by the brain to enter a state of stress, which causes the release of cortisol. Cortisol is responsible for preparing the body for “survival mode” by breaking down muscle tissue for readily available energy.

A healthy body composition is also associated with a low amount of body fat. Each day, the body burns calories consumed through exercise and basic internal processes at a rate referred to as basal metabolic rate (BMR). In order for weight loss to occur, the number of calories burned must exceed the amount consumed.

Controlling calorie intake and portion size is important in promoting weight loss; however, inadequate sleep can hinder this. Two major hormones involved with hunger, leptin and ghrelin, are highly affected by sleep. Ghrelin is responsible for the feeling of hunger, while leptin triggers a sensation of fullness. When the body does not get enough sleep, ghrelin production increases, and leptin production decreases, which causes the feeling of hunger and may result in more calories consumed.

Besides exercise, BMR is the body’s primary means of burning calories. BMR is proportional to the amount of lean muscle mass in the body, and the more lean muscle mass there is, the more calories the body burns each day. However, not getting enough sleep has been shown to decrease overall energy expenditure. As a consequence, even with same diet, the body does not burn as many calories throughout the day, which hinders fat loss. 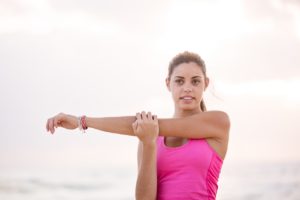 What the Brain does During Sleep

Sleep is how the body reenergizes itself both mentally and physically, and getting enough sleep each night is critical to keep the body healthy and functioning properly. During sleep, the brain enters into two different stages, REM and NREM. Each affect the brain and body in different ways.

REM Sleep: REM, or “rapid eye movement,” is a stage of sleep where the brain remains quite active, producing small, high-frequency waves. Dreaming occurs during REM sleep and the body temporarily becomes paralyzed. For approximately 25 percent of time during sleep, the brains remains in REM stage.

NREM Sleep: NREM or “non-rapid eye movement,” consists of three substages which slow down and synchronize brain waves. NREM is commonly referred to as “deep” sleep.

The body cycles through the three stages of NREM sleep before entering REM sleep. This cycle takes around 90 minutes to complete and it repeats throughout the night. The more cycles the brain can complete each night, the better the body is able to rebuild and recover at the cellular level.

To learn more about how sleep affects body composition, A CompID Scan using DEXA technology can be utilized to measure the effects of sleep on body composition by providing a full-body comparable analysis of bone density, fat, muscle mass both before and after periods of adequate or inadequate sleep. Schedule a series of CompID Scans to begin understanding trends in your own body composition that may be affected by sleep patterns.