The Keto Kraze: Is a High Fat, Low Carb Diet Right for You?

The Keto Kraze: Is a High Fat, Low Carb Diet Right for You?

Whole30, Paleo, Atkins, DASH, Flexitarian. Each year a new diet plan goes viral, promising improved health, weight loss, and longevity. Some plans like Whole30 and Paleo rely on evidence from human ancestral digestive and lifestyle roots to optimize nutritional health. Others reduce macronutrient groups drastically in an effort to recondition the metabolism to burn energy more efficiently, or are specifically designed to combat symptoms associated with chronic diseases. Some diets are heavily rooted in research, while others extrapolate from a few studies blown into mainstream attractions through sensationalized media attention. Whichever the case, it’s important to understand that what works best for one individual may not be as beneficial to the next. On the other hand, it may be worth exploring different, innovative diet plans that could help improve your own performance, gut health, energy, or mental agility.

Over the past few decades, trends in eating behaviors have shifted drastically due to new research, food technology, industrial advancements, and agricultural policies. Where once a “meat and potatoes” diet reigned supreme, a new “low fat” mindset swept the nation in a then well-meant effort to improve health. More recently, science has hinted towards the contrary: that a diet higher in fats can be beneficial. Thus, the newest and now widely popular “ketogenic” diet has emerged and has become a household name, especially in the health and fitness community.

Fat as a Primary Energy Source 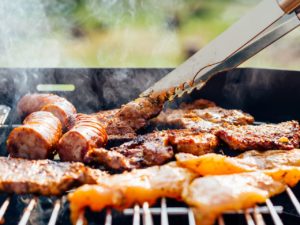 The word “fat” often gets a bad rap: it’s wrongly associated with weight gain purely because of its name. Many traditional diet plans recommend a low-to-moderate daily intake of fat, with an equivalent or higher percentage of calories coming from protein and carbohydrates. The ketogenic, or “keto,” diet recommends consuming upwards of 80 percent of calories from fat, with moderate protein intake and very low carbohydrate intake. Fat in the diet should come from healthy, high-quality plant- and animal-based fats, including coconut oil, grass-fed butter and beef, wild-caught salmon, nuts, and egg yolks.

Why so much fat? It’s a matter of conditioning the metabolism to draw from a different source of energy. Typically, the body uses readily available carbohydrates (in the form of glucose) to burn energy. Once the body is depleted of carbohydrates, it will turn to stored fat in the liver and eventually, fatty acids and amino acids in muscle for fuel. On an extremely low carbohydrate diet, fat stored in the liver is converted into ketones as a source of energy. Once the body reaches a state where it burns ketone bodies for energy, it is said to be in “ketosis.” This concept is the basis for a keto diet: training the body to tap into fat stores for energy first by drastically limiting carbohydrate intake and consuming a higher proportion of fat.

Keto, Then & Now
The keto diet originated in the 1920s after evidence suggested improvements in symptoms of epilepsy and other neurological conditions. Since then, studies have shown that they diet may improve behavior and attention in children with Autism spectrum disorder, weaken cancer cells, and reduce the risk of cardiovascular disease and Type 2 diabetes. Apart from its role in medical science, the keto diet also has demonstrated impressive results with regard to body composition.

The keto diet has received attention from elite athletes to everyday gym goers due to its impact on body composition, namely through its role in burning fat stores while keeping lean muscle intact. It has been shown to be an effective means of rapid weight loss, mostly water weight in the first few weeks, then accelerated body fat loss over time. Unlike most restrictive diets, a keto diet does not break down protein in muscles for glucose because it becomes conditioned to burn fat consumed in the diet. Studies have suggested an increase in lean muscle mass and decrease in body fat for participants who follow a ketogenic diet and perform regular resistance training. As we know, lower body fat is associated with better overall health. But is the ketogenic diet right for everyone, and it is safe to prescribe to long-term? The jury’s still out.

There are side effects associated with a keto diet and potential long-term implications to consider before jumping on the high-fat train. In the first phase of transitioning to a keto diet, it is common to experience fatigue, irritability, thirst, and constipation – all symptoms of what is known as “keto flu.” After the body has adjusted to sourcing energy from fats, many experience increased energy and mental focus, decreased appetite, substantial weight loss, lowered blood pressure, and higher HDL cholesterol. However, there is evidence of negative effects of sticking to the diet long-term, including high LDL cholesterol, kidney stones, and disruptions in menstrual cycles in women have been known to occur.

Best Advice: Listen to Your Body

Like any new diet that alters the body’s metabolism, it’s always safe to first invest time into understanding how your body functions at its healthiest, happiest state. Noticing how your body feels when trying a new diet plan, or working with a nutrition coach to develop a personalized nutritional profile, can ensure you are adopting a lifestyle that aligns with your goals and current state of health. If you’re curious how a specific diet plan, like keto, might affect your body composition, data from comparative CompID Scan using DEXA technology can provide evidence of changes in fat mass and lean muscle mass before and after applying specific changes in macronutrient intake and exercise regimens. Schedule a series of CompID Scans and participate in our nutrition coaching program to design an optimal plan to reach your body composition goals.

Does Cryotherapy Increase Metabolism? We Put it to the Test