Client Perspective: I Tried to Improve my VO2 Max and it Didn’t Go Well

Client Perspective: I Tried to Improve my VO2 Max and it Didn’t Go Well

Ryan Pfister, a CompositionID client in Washington, DC, documents his journey with VO2 max testing. This post was originally published on Ryan’s Medium page. Thanks for letting us showcase your journey, Ryan!

I’ve been trying several different fitness experiences over the past couple of years. Most recently, I had success using weight lifting and fasting to lose fat without losing muscle.

Next up on my list was to try to improve my cardiovascular fitness. I’ve been feeling jittery during the day, and I’ve been wondering if doing more cardio would stop the problem.

I learned the standard cardio fitness metric is VO2 max. VO2 max is important because it’s correlated with running speed, even at long distances. So I can do a 10 to 20 minute test that somewhat predicts how well I’ll do at running a 10K, half-marathon, or marathon — which is great, because I don’t feel like running any of those.

The VO2 max test itself is significantly more hard core than a DEXA scan. With a DEXA scan, you just lie down and a camera moves from the top of your body to the bottom in a couple minutes.

With VO2 max, you do a hard workout. They mount a mask over your nose and mouth and a heart monitor on your chest so they can see how much oxygen you’re taking in and what level your heart is beating at. Then you run on the treadmill or ride an exercise bike. They increase the difficulty every minute until you tire out and give up. 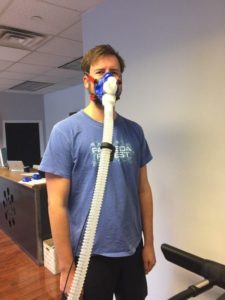 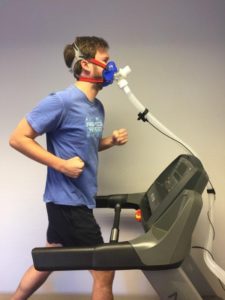 Look at me go!

The first time through, I made it about 11 minutes in. As expected, I was really out of breath at the end.

Happily, the results were worth it. I got a score of 51.2, which apparently is “superior.” With any of these tests, I’ve learned the population sample makes all the difference. If I were comparing myself to highly trained runners clocking in at scores of 60+, I definitely wouldn’t be superior. But I appreciated the compliment nonetheless! 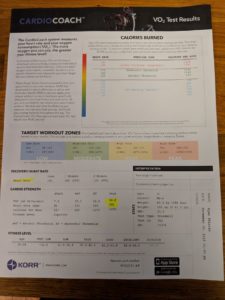 Closeup of the key number

Now it was off to try to improve my score. I did the first test on November 30, and I signed up for a retest on January 11, so I had 42 days to get better.

In the spirit of efficiency (read: laziness), I wanted to see what the minimum amount of cardio I could was and still see an improvement.

How I tried to improve

According to the Internet, the key is high-intensity interval training (HIIT). Basically the idea is to run do multiple intervals where you run really hard rather than running steady at a slower speed without breaks. According to some of the studies, you can see improvement with even just 4 minutes of training several times a week. Not four minute intervals — four minutes total.

So my goal was to do the 4 minutes of cardio training (a.k.a. a “Tabata”) 3 times a week. In practice, I only did it about 2 times a week. I had gotten really used to working out twice a week when I was just lifting, and I often didn’t do a third day. I usually just added the run onto the end of my lifting workout.

I was hoping that, since I almost never did cardio before, even this little bit of new cardio would help. Unfortunately, it didn’t. 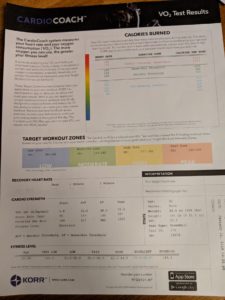 And the worst part was: I’m now no longer superior — just excellent.

Now, there are a few confounding factors here:

So I’m skeptical that I actually got worse as a result of my regimen, but I certainly didn’t get better. My best theory is that since I’m already in decently good cardio shape, doing such a small amount of training didn’t show an impact. So I’m going to try training again with a little more intense workout.

The plan is do 1 minute running followed by 1 minute rest 10 times (20 minutes total) 3 times a week. I may mix it up with 5 minutes running follow by 2 minutes rest. Both of these workouts are scientist-recommended.

I’m also hoping this workout helps with jitters. The four-minute workouts didn’t make a significant impact there, but I’m hoping the longer duration will make a dent.

Planning to try again in 30 days — check back in late February!

Disclosure: As part of this fitness experiment, Composition ID gave me the VO2 max tests for free. If you want to get your own scan, check them out!

The Benefits of Online Nutrition Coaching